2022 FX Summit Recap: The FX Summit 2022 was the first social trading convention held in Miami and hosted by Chart Addicts. The biggest names in Forex trading were present at this event along with many Forex-related companies.

If you love Forex and you didn’t attend, then you missed out! Not to worry we want to cover some of the highlights and inform you that the FX Summit will be back in 2023!

Also, Top Tier Trader is a sponsor of the FX Summit, so we had a featured booth and section where people were able to get more information about our challenges and speak with Anthony Williams and Cue Banks! 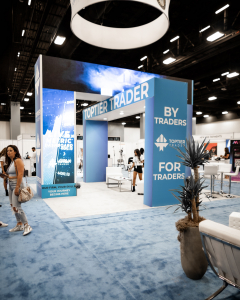 For more information about our Top Tier Challenges: CLICK HERE

There are summits for everything imaginable, but what separates the FX community from others is the educational aspect. The traders who have taken the time to speak are trying to give back to their community by helping them grow as traders.

The FX Summit is a community of people who are trading to live and trading isn’t just about expensive cars and high-end lifestyles. Many people have become FX traders because they simply couldn’t make enough in their 9 to 5 jobs, so trading became a way to pay their bills. 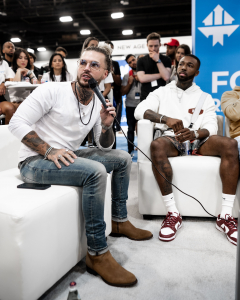 Cue Banks exemplifies an average person turned into a superstar through hard work and perseverance. Initially, Cue Banks started his trading journey while he was an employee at Target, and learning how to trade propelled him into the 1%.

Unlike other industries where people go from average to the super-wealthy, Cue Banks wasn’t satisfied with withholding his secrets to success.

He set out to prove that if you apply his strategies then you too can become a successful trader and that is what the FX Summit is really about. It is about successful traders teaching other traders how to improve and level up.

It takes a long time to become a Top Tier trader but the right strategy and perseverance will eventually take you to the top.

Lisaldo Tavarez’s journey was a bit different than most of the other traders. His reason for not giving up was that he literally had no choice. In his story, Lisaldo highlights that he was a felon who couldn’t get a normal job, so trading was his only path to being able to support his family.

From being homeless to sleeping on his aunt’s couch, Lisaldo put in the hard work and time to rightfully deserve his spot on the FX Summit stage. Everyone has a different why for their reason to trade, but Lisaldo’s story was especially impactful because he went from absolute poverty to being a successful business owner.

To View All of the Speeches, GO TO THE OFFICIAL FX SUMMIT WEBSITE HERE

If you missed out on the 2022 FX Summit, then you have another opportunity in 2023! The 2023 FX Summit will feature more guests and have more to offer. This is a truly life-changing experience and if you are interested in being a successful FX trader, then you don’t want to miss out on what the 2023 FX Summit has to offer.